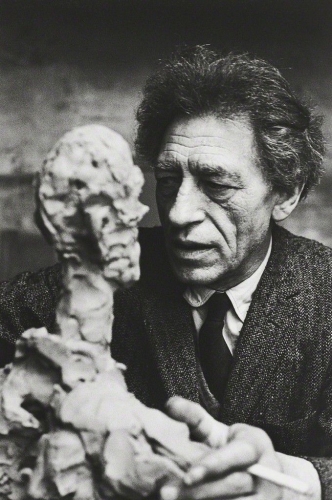 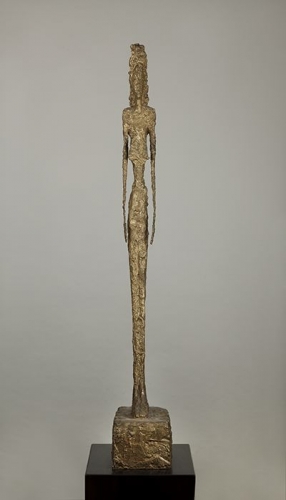 Alberto Giacometti was born on October 10, 1901 in Borgonovo, Switzerland, and grew up in nearby Stampa. The son of Post-Impressionist painter Giovanni Giacometti, Giacometti was introduced to art from an early age, and attended the École des Beaux-Arts and the École des Arts et Métier in Geneva. In 1922, Giacometti moved to Paris, where he studied under the sculptor Antoine Bourdelle, an associate of Auguste Rodin. While in Paris, Giacometti began to experiment with Cubism and Surrealism, and was a leading participant in the Surrealist circle from 1930 until 1934. Among his associates were Joan Miró, Max Ernst, and André Masson.

Between 1936 and 1940, Giacometti began sculpting the human head, focusing on the models' gaze. It was during this time that the statues started to become stretched and elongated, a style instantly recognizable as his own. Giacometti preferred to work from live models, using those he was closest to as his subjects, such as his brother Diego—another defining element of his oeuvre. From 1938 to 1944, Giacometti worked primarily on a small scale, with sculptures not exceeding a height greater than 2.75 inches.

During World War II, Giacometti returned to Switzerland to seek refuge. It was during this time he met Annette Arm, his future wife and primary female muse. They would marry in 1949 after returning together to Paris in 1946. Following his marriage and the end of the war, Giacometti’s sculptures grew to a larger-than-life size, although they remained incredibly slender, evoking the ravages the war had wrought. Although first and foremost a sculptor, Giacometti also experimented in painting in his later years, composing monochromatic portraits of his close associates.

The 1950s and ‘60s saw Giacometti’s rise to prominence internationally following a 1948 exhibition at the Pierre Matisse Gallery in New York. He exhibited in the French Pavilion at the Venice Biennale in 1956, with a concurrent retrospective exhibition occurring at the Kunsthalle Bern. In 1961, he was awarded the Sculpture Prize at the Carnegie International in Pittsburgh, and the Grand Prize for Sculpture at the Venice Biennale the following year.

Throughout his career, Giacometti’s sculptures have been defined by a struggle between matter and meaning. His easily recognizable forms are steeped in phenomenology and existentialist theory, highlighting his relationships with such prominent minds as Simone de Beauvoir, Jean-Paul Sartre, and Samuel Beckett. His work can be found in the permanent collections of the Solomon R. Guggenheim Museum, New York; the Museum of Fine Arts, Boston; the Tate Gallery, London; and the Metropolitan Museum of Art, New York, among others.

“Once the object has been constructed, I have a tendency to discover in it, transformed and displaced, images, impressions, facts which have deeply moved me.”

Casting Modernity
Bronze in the XXth Century April 24 - June 7, 2014
Back To Top