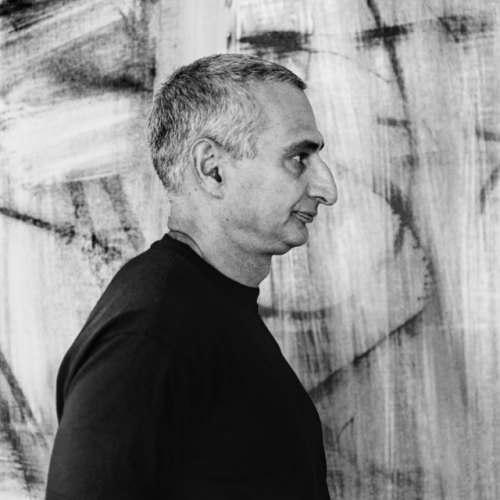 Christopher Wool was born on September 16, 1955 in Boston, Massachusetts. In 1969, he moved to New York where he studied painting and photography, first at Sarah Lawrence College and later at the New York Studio with American abstract painters Jack Tworkov and Harry Kramer. From 1980 to 1984, Wool worked as a part-time studio assistant to American Minimalist sculptor Joel Shapiro.

Wool is best known for his paintings of large, black stenciled letters on white canvases, which the artist began in the late 1980s after supposedly seeing graffiti on a brand new white truck. Based in Manhattan's Chinatown since 1976, Wool became a part of the downtown New York art and music scenes and befriended artists Robert Gober, Richard Prince, James Nares and Jeff Koons, among others. In the 1980s, Wool was also around Jean-Michel Basquiat, Julian Schnabel and Cindy Sherman. Absorbing these influences, Wool’s work borrows from Pop Art techniques like the use of silkscreen printing, while utilizing 1970s conceptualism's incorporation of language.

In 1998, a retrospective of Wool's work was mounted at the Museum of Contemporary Art, Los Angeles, an exhibition which then traveled to the Carnegie Museum of Art in Pittsburgh and Kunsthalle Basel in Switzerland. In 2009, he had an exhibition at the Gesellschaft für Moderne Kunst am Museum Ludwig in Köln, Germany and in 2012 at the Musée d'Art Moderne de la Ville de Paris. From October 25, 2013 to January 22, 2014, a retrospective of Wool's work was exhibited at The Guggenheim Museum in New York City, and traveled to the Art Institute of Chicago in the spring of 2014.