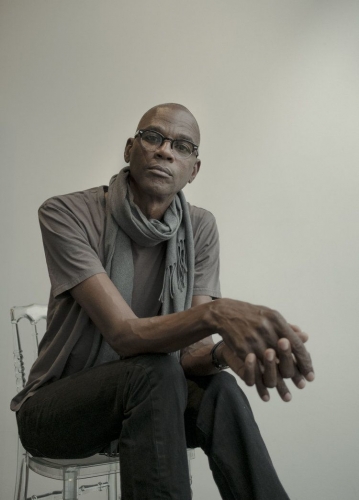 Mark Bradford was born in Los Angeles, California on November 20, 1961 to a family of hairdressers. Bradford’s early work used the materials found around salons, including the paper rectangles used for permanents, bobby pins, and hair dye, beginning an interest in the use of found materials. He is best known for his multimedia abstract paintings whose laborious surfaces hint at the artist’s excavation of emotional and political terrain. Bradford also creates public art, installations, and video, often exploring the relationship between high art and popular culture and between materiality, surface, and image.

Bradford describes his work: “Think about all the white noise out there in the streets: all the beepers and blaring culture—cell phones, amps, chromed-out wheels, and synthesizers. I pick up a lot of that energy in my work, from the posters, which act as memory of things pasted and things past. You can peel away the layers of papers and it’s like reading the streets through signs.” While applying these materials, Bradford physically interacts with the work—sanding, tearing, bleaching, and weathering the surface. Bradford’s ephemeral materials not only come to wear the grit of outdoor signs and billboards, but also reveal their temporary condition as objects that change according to the needs of those who employ them.

Mark Bradford has received many awards, including the MacArthur “Genius” Fellowship (2009); the Bucksbaum Award (2006); the Louis Comfort Tiffany Foundation Award (2003); and the Joan Mitchell Foundation Award (2002). From 2010-2012, the first traveling survey of Bradford’s work was exhibited at the Wexner Center for the Arts, Columbus; the Institute of Contemporary Art, Boston; the Museum of Contemporary Art, Chicago; the Dallas Museum of Art; and the San Francisco Museum of Modern Art. In 2017, Bradford represented the United States at the Venice Biennale. His work can be found in the collections of the Hirshhorn Museum and Sculpture Garden, Washington D.C; the Museum of Modern Art, New York; the Tate Gallery, London; and the Walker Art Center, Minneapolis, among others.

“My art practice is very detail, labor intensive and I think that that's a way of slowing myself down so that I can hear myself think. That quieter voice has sometimes the more interesting idea, if I can get to it.”