For its inaugural exhibition, L&M Arts Los Angeles is honored to present Three Sculptures by Paul McCarthy, the artist’s first exhibition in his hometown in a decade. The gallery will be featuring new large-scale sculptures, both indoor and outdoor, of all different mediums; these represent the culmination of several major themes that have run throughout McCarthy’s work for many years.

Train, Mechanical (2003-2010) is a fully automated tour-de-force that features a George Bush/pirate hybrid mounting a pig from behind, while another pig humps the same pig’s skull, finding aural penetration. This scenario then repeats itself in a figurative “train.” The work finds visual precedent in earlier sculptures with the same cast of characters and related configurations, such as Train, Mechanical, Pig Island (2007), Mountain (2009) and Static (2004-2009). All of these works stem from Pig Island; this perpetual work in progress, inspired by the Disney ride Pirates of the Caribbean, emphasizes process as sculpture. Many sculptures were spawned from this fertile environment full of political satire, cultural commentary, and playful experimentation with various modes of art production. In Train, Mechanical, McCarthy has also found inspiration from an ongoing fascination with carnival rides and mechanized mannequins, first seen in his seminal work The Garden (1991-1992). Train, Mechanical takes this early interest to new heights. Here, one experiences fully articulated body parts, right down to the male figure’s pursed lips and the pigs heaving chest – all in the service of a mesmerizing tableau that redefines sculptural form.

Also included in the exhibition are the latest works from McCarthy’s Hummel series, writ large and executed on a monumental scale. The mid-century Germanic kitsch figurines of the same name inspired the Hummels, first shown in Zurich in 2009, depicting rosy-cheeked children in idyllic repose. In McCarthy’s world, however, this Aryan innocence becomes a target for parody, and ultimately, defilement and disfigurement. Their deformed innocence suggests the conditioning of children, from Hitler youth to contemporary, TV-addled teen consumers. Ship of Fools, Ship Adrift (2010) derives from a saccharine nautical scene, and is reworked as an eight ton, black-bronze carnival at sea. The figures of children are decomposed; their lyrical voices halted by pipes ripping through their youthful vocal cords. It appears adorable and obscene all at once. In Apple Tree Boy Apple Tree Girl (2010), a miniature Adam and Eve find themselves reborn as an eighteen foot überkinder; they remain only a suggestion of their former selves, almost sweetly deformed and just to the point of abstraction. These darling figures teeter between portraits of childlike purity and a Garden of Eden gone terribly wrong.

A fully illustrated book, Hummel, and a catalogue, Three Sculptures, accompany this exhibition, with essays by the artist, Diedrich Diederichsen, and Benjamin Weissman. 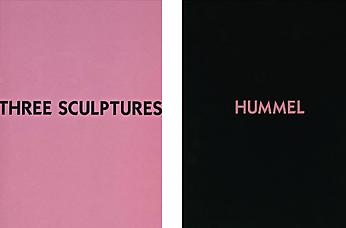