Mnuchin Gallery is proud to announce an exhibition of works by Sam Gilliam. The exhibition will present examples of the artist’s two seminal series, the Beveled-edge and Drape paintings, spanning from 1967 to 1973. This will be the artist’s first solo exhibition in New York in nearly twenty-five years, and coincides with his installation at the Central Pavilion of the 57th Venice Biennale. On view from November 2 through December 16, 2017, it will be accompanied by a fully illustrated catalogue. An opening reception will be held Thursday, November 2 from 5:30 to 7:30pm.

Gilliam established himself at the forefront of American abstraction while working in Washington, D.C. in the 1960s, when his experiments with paint application and his radical transformation of the canvas support profoundly expanded the possibilities for the future of abstract painting. Working alongside Color Field painters such as Kenneth Noland and Thomas Downing, Gilliam elaborated upon Color Field processes and aesthetics while subverting Greenbergian notions of the “integrity of the picture plane,” and disrupting the boundaries between the visual world of painting and the tangible world outside it. At a time during the Civil Rights movement when African American artists were expected by many to create figurative work explicitly addressing racial subject matter, Gilliam persisted in pursuing the development of a new formal language that celebrated the cultivation and expression of the individual voice and the power of non-objective art to transcend cultural and political boundaries.

This exhibition takes as its starting point Gilliam’s Beveled-edge, or Slice, paintings, begun in 1967. To create these works, Gilliam employed the technique of staining raw canvases with acrylic paint also employed by Morris Louis and Helen Frankenthaler to fundamentally new ends. He began by pouring bold, sometimes even fluorescent colors of paint directly onto unprimed, unstretched canvases, which he would then fold and crumple while still wet to create luminous washes of color layered with glowing striations, drips, and pools of pigment. Gilliam then stretched his canvases on custom-made stretchers with a beveled edge. When hung, these beveled edges projected the works off of the wall and towards the viewer, removing the image from the two-dimensional realm of traditional painting and into the viewer’s “real” physical space. Variations of his pouring technique resulted in a seemingly endless array of compositional structures, ranging from elegant vertical columns of color, to collage-like layers of diagonal folds, to dynamic radial bursts of light, all of which were shaped by both a combination of carefully controlled processes and a crucial element of chance.

It was in 1968, in preparations for an exhibition at the Corcoran Gallery of Art, that a fortuitous accident in the studio planted the seed for what is perhaps the artist’s best-known body of work—the Drape paintings. When pinning his large, unstretched painting Niagra to his studio wall, one of the affixed points gave way, causing a section of the canvas to flow to the ground. Awakened to the possibilities of the new forms a canvas could take, Gilliam went on to create a series of works in which he wholly abandoned traditional stretcher supports. Gilliam instead treated his canvases as a sculptural medium, gathering and knotting the material and suspending his bunched and folded forms from the ceiling or the wall. He would then pour and spray his paints onto his canvas from above, allowing his colors’ path to be guided by gravity and the folds of the material. In addition to radically subverting the distinctions between painting and sculpture, these freely suspended, monumentally-scaled works reinvented the way in which painting is encountered, making the act of viewing an environmental, “all-over” experience that paved the way for immersive installation art of the following decades. In addition, they shared links to process art and postminimalism of the 1960s and 70s in their exploration of the intrinsic properties of their materials and those materials’ response to different processes and conditions. Says the artist, “The suspended paintings began by celebrating the working process and ended with the involvement of the wall, the floor, and the ceiling. The year 1968 was one of revelation and determination—something was in the air, and it was in that spirit that I did the drape paintings.”

Gilliam’s work is currently on view at the Central Pavilion of the 57th Venice Biennale, where it was featured in 1972 at the 36th Venice Biennale’s American Pavilion curated by Walter Hopps. Gilliam’s work can also currently be seen in a solo exhibition at the Seattle Art Museum through November 26, 2017. He is featured in the Tate’s exhibition Soul of a Nation: Art in the Age of Black Power, which is on view through October 22 and will travel to the Crystal Bridges Museum of American Art, Bentonville, and the Brooklyn Museum. Gilliam also will be the subject of a forthcoming traveling retrospective at the Kunstmuseum Basel, organized by Josef Helfenstein, in June 2018. In 2005 - 2007, Gilliam was the subject of a retrospective organized by the Corcoran Gallery of Art, Washington, D.C., which traveled to the Speed Art Museum, Louisville, and the Contemporary Arts Museum, Houston. The artist has also been the subject of solo exhibitions at the Phillips Collection, Washington, D.C. (1967 and 2011); the Corcoran Gallery of Art, Washington, D.C. (1969, 1983 and 2005); the Museum of Modern Art, New York (1971); the Philadelphia Museum of Art (1975); the Studio Museum, Harlem (1982); and the Whitney Museum of American Art, Philip Morris Branch, New York (1994), among other museums. Gilliam’s work is represented in public collections worldwide, including the Metropolitan Museum of Art, New York; the Museum of Modern Art, New York; the Whitney Museum of American Art, New York; and the Tate, London, among others. Born in 1933 in Tupelo, Mississippi, Gilliam currently lives and works in Washington, D.C., where he has resided since 1962. 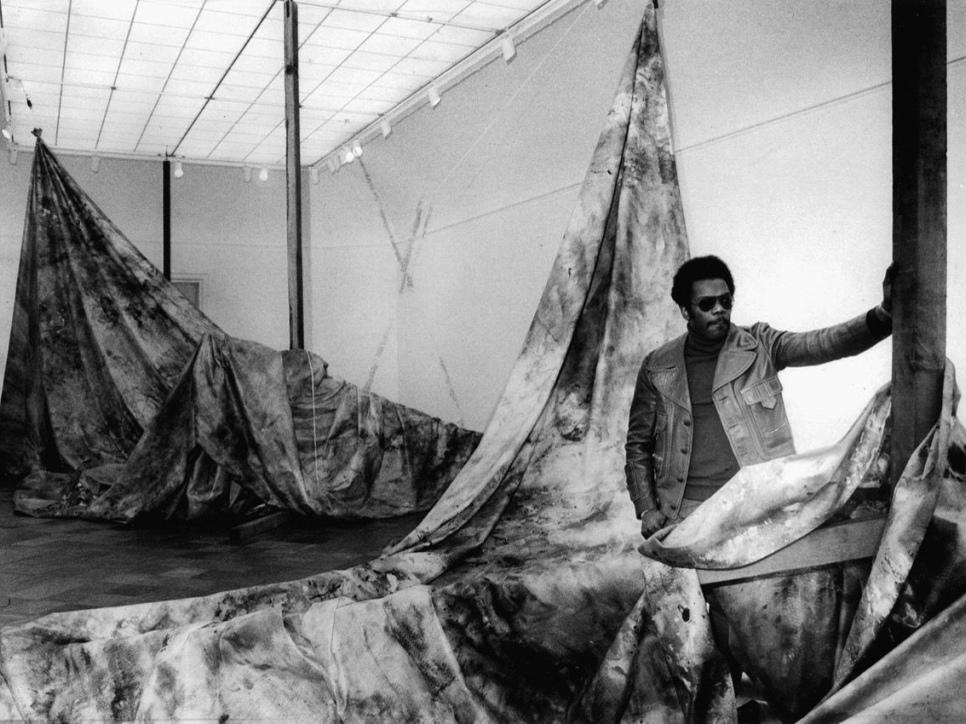 Sam Gilliam
Back To Top