L&M Arts is proud to present Me and My Brother, March 18th to April 26th, our first exhibition of paintings by Tianbing Li. Li has been an exciting presence in the world of contemporary art for many years, with several solo shows in Paris, Munich, and Geneva; he has been the subject of four monographs, and won the Award of the Biennale at the 2003 Biennale d'Issey. This is Li's second New York show, and we are honored to represent him internationally. The exhibition will be accompanied by a fully-illustrated catalogue with an essay by Britta Erickson, noted scholar and lecturer in the field of contemporary Chinese art.

Li was born in China in 1974, and now lives and works in Paris. After earning a degree in International Politics in Beijing, he studied at the Beaux Arts School. He began to paint in earnest after finishing with honors at the Beaux Arts, and has worked successfully in a remarkable range of subject and medium.

The current show highlights a new series of paintings that look back to the artist's childhood. Drawing on black-and-white photographs of him taken by his parents, Li has created a series of grey-toned portraits. These are in fact self-portraits, doubled; the youngest child in each image represents the artist, while the second is an imaginary brother, who ages as the paintings progress. This imagined sibling brings a sense of dislocation, unease, and yearning to the paintings, and speaks to the hazards of memory. Is the brother imagined by the artist looking back, or by the child looking forward?

Me and My Brother's subject matter is deeply personal, but it also addresses modern China's furiously-paced evolution by looking back to a past which, although recent, seems almost unimaginably distant. While Li's work often comments on the radical changes caused by Western investments in China, he has built this series around his own intimate presence. His unmistakably contemporary treatments of these black-and-white images tense against their historicity; the direct gazes of his subjects provoke an intimate response from the viewer, inviting empathy and identification. 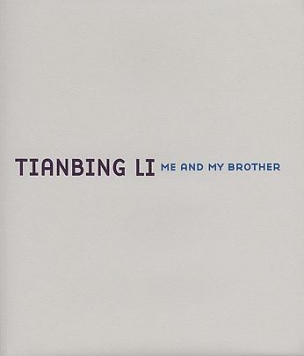