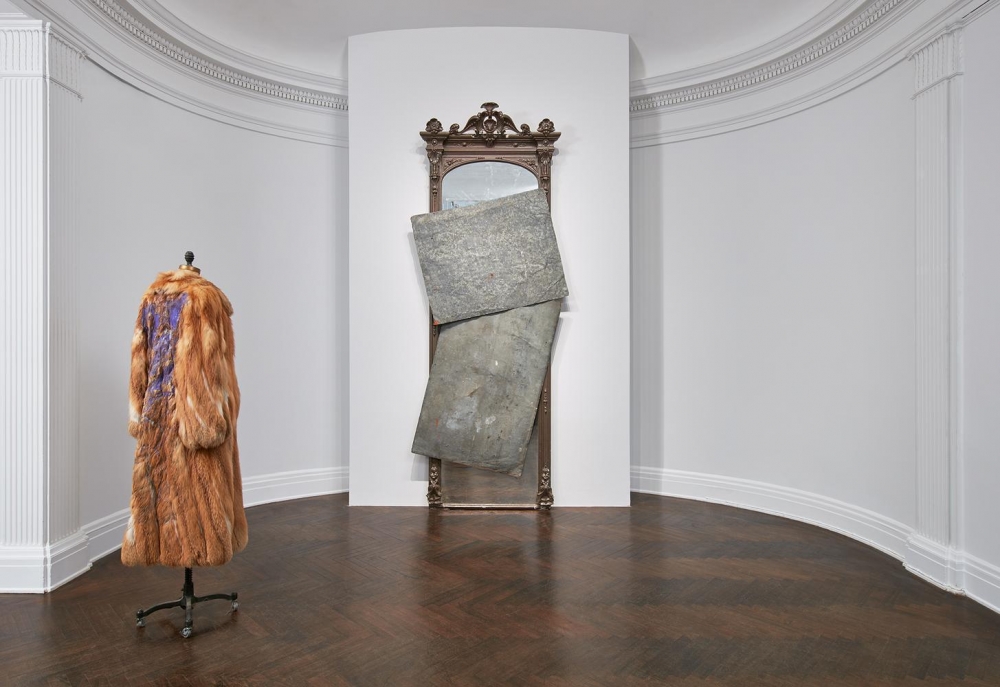 The fiction of the facts assumes innocence, ignorance, lack of intention, misdirection; the necessary conditions of a certain time and place.
Have you seen their faces?
–Claudia Rankine, Citizen: An American Lyric (2014)

“Prankster” is a word that comes up repeatedly in discussions of artist David Hammons and his work. Much has been made of his evasiveness, of the fact that he has spent his career flouting the art world’s propriety: his continual refusal to settle on a dealer; the propensity to make himself unavailable to curators even in the midst of show preparations; to stage exhibitions, performances, and installations with no prior announcement. Then there are the works themselves, from alluring abstract canvases you will never really see, as they’ve been shrouded with trashed vinyl tarps, to sculptures that cull beauty from empty bottles of $1.99 wine. But to seize and insist upon the perceived jokey qualities of Hammons’s art and persona resists the deeper significance of his output over the past 50 years. “David Hammons: Five Decades,” currently on view at Mnuchin Gallery, offers a corrective to this narrative. Comprised of 35 works spanning from the late 1960s to the present, it’s a crystalline show that helps to elucidate the long view of an artist who has made a career of otherwise obfuscating it.

This is the third show of Hammons’s work presented by Mnuchin (formerly L&M Arts), and though much care has been taken to note that the gallery does not strictly represent the artist, it seems clear that Hammons finds satisfaction in the contrast of having his work — frequently made from lowbrow or dilapidated materials — showcased in the refined and august premises of the Upper East Side townhouse. It also eschews the sterility of the White Cube, of which Hammons has in the past proclaimed his disdain. Notably, just prior to this exhibition’s opening, Hammons arrived unexpectedly at Mnuchin and upended the nearly complete installation: rearranging, removing several works, and adding new ones. The entirety of this show at Mnuchin, as organized by Hammons, becomes its own distinct work of art, a complete whole made from its heterogenous parts.

Shrouds abound in the exhibition. Two large paintings, both untitled (2008–14 and 2015, respectively) are almost entirely obscured by ragged tarps that that dangle across their faces. With two large sculptural works, also both untitled (2013 and 2014, respectively), Hammons has concealed ornate, gilded floor-to-ceiling wall mirrors, one with a black cloth and one with large sheets of galvanized steel. Aside from the more apparent association of this shrouding as a manifestation of Hammons’s own mystique, it also brings to mind the Jewish tradition of covering the mirrors in a house after the death of a beloved. One wonders whether these works, all made within the last few years, are indicative of an artist reflecting on his legacy in his elder years.

With the inclusion of the diminutive but potent In the Hood (1993), a shroud of another sort takes on a more politically foreboding tone. The work consists simply of the hood of a sweatshirt severed from the shirt itself, and hung on one wall. The dark void at the center of the hood, where a head should be, conjures the familiar image of the Grim Reaper, and when considering its high placement on the wall one can’t help but be reminded of the deplorable chronicle which pollutes American history — that of the scores of African-Americans lynched at the hands of whites through the decades. And at nearly a quarter-century old, In the Hood seems remarkably prescient as an object, anticipating the outsize symbolism of racial inequity in American culture that the “hoodie” has taken on — especially acute in recent years.

So loaded has that article of clothing become that poet Claudia Rankine selected In the Hood as the cover image of her award-winning 2014 book of prose poetry, Citizen: An American Lyric, which reflects on black life and systemic injustice in the United States and whose pages are peppered with reproductions of artworks by prominent black artists. It also includes a passage dedicated to the memory of Trayvon Martin, the unarmed teenager shot and killed by George Zimmerman in 2012. Zimmerman claimed Martin was suspicious in part because of the dark hoodie he wore as he walked down the street of a private community. The point is underscored by several black-and-white prints from the late 1960s and early 1970s Hammons has hung in the same gallery, whereby the artist pressed his own body to the page and then added charged imagery like the American flag, or the spades of a playing card.

Robert Storr says of Hammons, in an essay included in the exhibition’s catalogue, “From the very start it is plain that he has set his higher goals as high as they come. Specifically that has meant escaping the sorry fate of ghettoization while slipping the noose of becoming a token ‘black’ artist in a predominantly ‘white’ art world.” Considering Hammons’s work solely through the lens of race runs the risk of reducing his conceptual athleticism to a single note. As an object, In the Hood is a descendant of Duchamp’s Fountain (1917), down to the conscious, unexpected placement of the work. The viewer garners a solid sense of the roots Hammons shares with artists like Piero Manzoni or Joseph Kosuth, who were thumbing their noses at artistic conventions in the early 1960s. By being able to see the long trajectory of Hammons’s output gathered together in this mini-retrospective, we can also understand how the disparate parts align.

In the last gallery, a taxidermied cat curls up on a wooden drum stool. Called Standing Room Only (1996), it has been placed in the corner, the cat’s sleeping face pointed towards the window instead of towards the center of the room. A creature known for its cunning and detachment, the cat might be Hammons’s spirit animal. Aloof and mysterious, with his back to the world, we revere the cat for what he is able to pull off — living freely, and purely on his own terms.