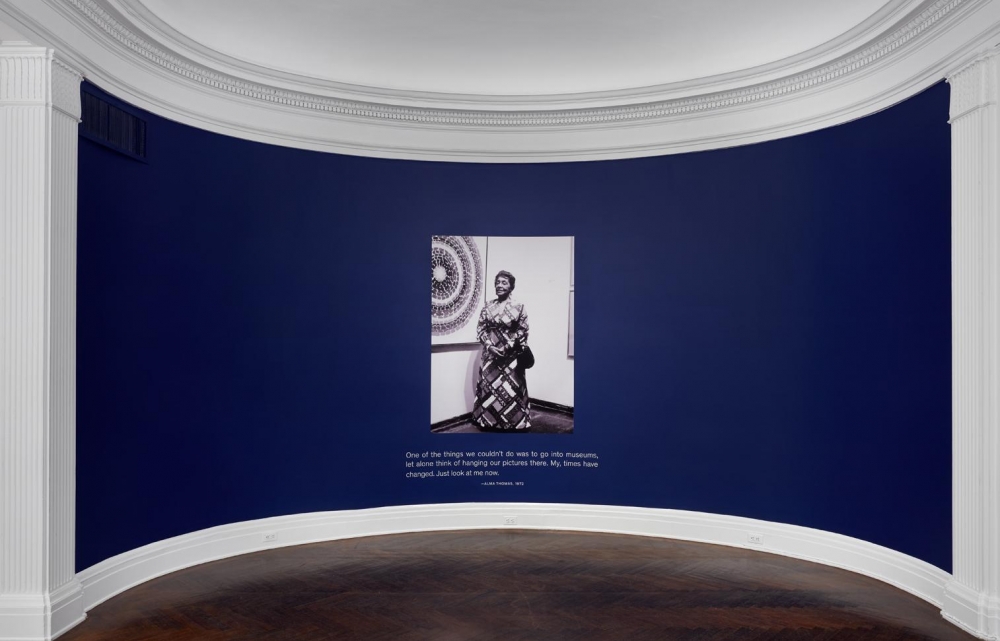 Earth, Wind & Fire’s 1975 album, “That’s the Way of the World,” sits beside a stereo speaker, atop an antique English mahogany pier table, beneath Alma Thomas’s, Skylight, 1973, an abstract painting in sapphire blue hues. This painting (pictured in an Architectural Digest photograph) had been chosen by First Lady Michelle Obama in 2009 for the private spaces of the White House. Today, Alma Thomas: Resurrection, on view at Mnuchin Gallery in New York, takes its title from another painting with a White House association. Acquired in 2014 and hung in the Old Family Dining Room, Resurrection was the first work of art by an African-American woman to enter the collection.

Mnuchin’s show, which is curated by Sukanya Rajaratnam, is Thomas’s first on the Upper East Side since 1976. Taking up the baton of recent Alma Thomas exhibitions at the Tang Teaching Museum and the Studio Museum in Harlem, Rajaratnam focuses on works from 1959 to 1976 that represent her mature style, distinguishing her from Washington Color School contemporaries such as Morris Louis and Gene Davis. By including rarely-seen works on paper, the curator also highlights Thomas’s iterative process, and her experimental studies on fine-quality watercolor papers.

Born in Columbus, Georgia, Alma Woodsey Thomas (1891-1978) was still painting in the small Victorian house that her family had occupied since 1907 in Washington, DC when she died at the age of 86. Thomas was born with a hearing and speech impediment. Her mother, a dress designer, believed that Alma’s condition was caused by the trauma that occurred during her pregnancy when a lynching party with ropes and dogs approached the family’s house. The family moved north in 1907.  Next year, the Columbus Museum  will present an Alma Thomas retrospective that will broadly explore her creative life—her artistic practice, as well as her interest in gardening, fashion, costume design, and graphic design—along with her hometown connections.

In the still-segregated nation’s capital, Thomas attended Armstrong High School where her dream was to become an architect and in 1924 became one of the first graduates of Howard University’s fine arts program. Loïs Mailou Jones, who taught in the department, invited Thomas to join the Little Paris Group, a salon that she cofounded with Céline Tabary, to discuss theories of modernism with other African-American artists, and to promote the artistic practice of art teachers. This must have been a lifeline for Thomas, who for 35 years worked as a devoted middle-school art teacher. She taught her students the latest dances, took them to lectures at the black-owned Barnett-Aden Gallery, designed marionette productions, and opposed the school board mandate to teach only vocational drawing to the “colored division” students. During summers, she rigorously pursued her own artistic education, earning a master’s degree at Columbia University in 1934, and studying painting at American University in the 1950s. While she worked representationally, I believe that all along she was experimenting within a continuum of abstraction that crystallized into a mature vocabulary around 1960, the year she retired and could devote herself full time to her art. Severe arthritis threatened this plan, but when in 1964, Howard University offered her a retrospective, she rallied and launched full force into the project.

One year after her retirement, she painted Blue Abstraction, 1961, with vigorously applied blocks of cobalt and marine blue, moss green, and red held in check by areas of bluish-black and white. Suggesting architectural forms or flickering lights at night, the interplay of horizontal and vertical strokes with encrusted textures remind me of Philip Guston’s pure abstractions of the mid 1950s.

Summer at its Best, 1968, exemplifies Thomas’s signature formal language and her insistence on beauty and exuberance—the experiences she sought in the seasons of her gardens, thunderstorms, or the mysteries of space exploration. Here, vertical curtains of saturated color are built up with short, inflected brushstrokes over a ground of white. The strokes, at times resembling dance steps or mosaic tesserae, follow an under drawing of pale pencil lines (like the warp threads in weaving) that subdivide the canvas. By overpainting with white here and there, Thomas controlled the swellings and attenuations of the color bands, and modified the intervals of light peeking through the colors. Her palette of marigold, chocolate brown, and goldenrod, shot through with cedar green, turns our thinking toward late summer landscapes, when a temperature drop stimulates one last push for trees to set winter buds and berries.

Her banner year was 1972, when Thomas became the first African-American woman to receive a solo exhibition at The Whitney Museum of American Art. There she is in a photograph at the opening, turned out in the grooviest, patchwork-printed gown, holding a pair of white gloves with the self-possessed bearing of an artist who has worked very hard to rise above marginalization and achieve such recognition.

The Apollo Space Missions captured Thomas’s imagination, and her interest in the cosmos was translated into works such as New Galaxy, 1970. There is a majestic restraint in this work, defined by the chromatic interweaving of closely related blues and pinks—the colors of water, moonlight, and sunrise. And here, the horizon is turned on its side, as if seen from the rotating capsule of the spacecraft.

As in Springtime in Washington, 1971, Thomas infused her mandala or circular-motif paintings with a radiance that pulsates like music throbbing through a subwoofer. The white background evokes the hues of marble and sandstone of the buildings—exemplars of an ideal democracy— on The National Mall, while concentric rings are painted in the tones of candied fruits. It is these paintings from the early 1970s that perfectly meld Thomas’s belief in the redeeming power of color with her internalization of the Bauhaus teacher Johannes Itten’s color theories.

In 1985, I was the art teacher at Diocesan Educational Campus, an all-Black, Catholic middle school in the Fruit Belt, a struggling but historically significant neighborhood in Buffalo, New York. Art class always involved dance breaks to the music of Earth, Wind & Fire. I wish that I had known then about the life of Alma Thomas, because my students and I needed to hear the stories of many more African-American artists who circumvented substantial odds in order to create singular works of art that were steeped in their understanding of our complicated, shared history.

artcritical
Back To Top