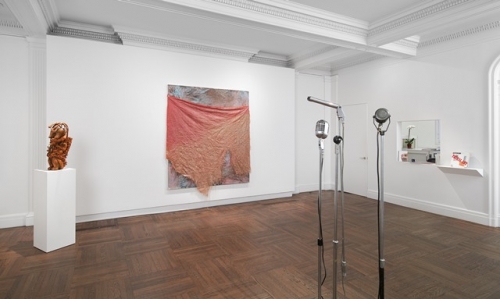 Exhibitions by New York artist David Hammons always create a stir in the art world, as he's selective about what he shows, when, and where.

A show opening next Tuesday at the tony Mnuchin Gallery, on Manhattan's Upper East Side, spans some fifty years of the artist's work, making it the kind of ambitious exhibition you might be more likely to see in a museum. The upscale setting is ironic, since Hammons's iconoclastic work often includes humble materials like rags, cigarette butts, and wine bottles. He collaborated with the gallery, something he seldom does, though he has in fact worked with Mnuchin on two previous shows.

“David Hammons: Five Decades" includes early works like his so-called body prints, in which he greased himself up with margarine, pressed himself against canvas or paper, and then dusted it with pigment, in works that evoke Yves Klein's ‘Anthropometry' paintings. It includes a fur coat whose back has been assaulted with paint; he showed similar works at the gallery in 2007, in an acid commentary on the fashion choices of many of the gallery's neighbors—and patrons.

And there's a sculpture that was shown in Documenta, the giant art show in Kassel, Germany, that appeared on the cover of Art in America's issue highlighting that 1992 show. That sculpture includes hair swept from barbershop floors. As Mnuchin partner Sukanya Rajaratnam told artnet News during a walkthrough, the gallery had to call on a Harlem barbershop to ask if they could supply some; “there's some hair loss when you move or install the work," she said.

It also contains ten small works that were added at the last minute and have never before been shown. They're cheap printouts of photos of his own performances and installations, hung off-kilter in discount Ikea frames. These works recall an unauthorized survey once organized by cheeky New York gallery Triple Candie that consisted entirely of low-res pictures of Hammons' works.

He Got an Early Start in Museums.
The Los Angeles County Museum of Art acquired his Injustice Case (1970) just a year after it was made—when the artist was only twenty-eight. The body print was inspired by a judge's order to bind and gag Black Panther Bobby Seale during a trial, and shows a black man—Hammons himself—bound and gagged, surrounded by the stars and stripes of the American flag. At the time, Hammons had been showing for merely a year.

He's a Genius. Literally.
It's official; he won won a MacArthur Foundation “genius" grant in 1991.

His Market Hasn't Caught Up with His Work.
All the same, his auction prices are relatively modest. In 2013, an untitled sculpture that combines a basketball hoop with candelabra fetched $8 million at Phillips New York. While that's not peanuts, it's not the kind of stratospheric amount that makes headlines. His next-highest auction price was just $3.5 million, achieved at Christie's New York in May 2014 in the blockbuster "If I Live I'll See You Tuesday" sale.

His market is rising, though; his top five prices at auction have all come within the last five years.

He's Vandalized Art; His Work Has Been Vandalized.
Hammons once urinated on a giant steel sculpture by Richard Serra, effectively making it into a modern-day version of Marcel Duchamp's urinal. As if that weren't enough, he also tossed a number of pairs of sneakers over the top of the work, echoing the way shoes often dangle from phone lines above the street in inner-city neighborhoods, thus imposing a piece of black vernacular onto a work by a white artist.

And when How Ya Like Me Now, his sculpture imagining the Reverend Jesse Jackson as a white man, went on display in an outdoor exhibition, black construction workers took offense and attacked it with sledgehammers. Hammons, of course, has since displayed the work in its damaged state, sledgehammers included.

He Loves Music.
Hammons was installing his works at New York's Museum of Modern Art for its 1991 show “Dislocations," focused on contemporary installation art, when he learned that Miles Davis had died. As Robert Storr recounts in Mnuchin's exhibition catalogue, he brought a boom box into the galleries and danced to the trumpeter's music to mourn his passing, which Storr describes as “a metaphor for the predicament of the Afro-American artist in the modernist context."

The title for How Ya Like Me Now comes from a Kool Moe Dee song.

And there's traditional Japanese music playing in the second-floor galleries at Mnuchin, on two busted-looking speakers sitting on the floor; the artist has traveled extensively in Japan, and, says Rajaratnam, the spare installation of the current show is informed by a Japanese aesthetic.

He Takes Back the Power.
Hammons is hardly at the beck and call of curators and collectors. In fact, he's done his best to upend what might be seen as the traditional balance of power. “The way I see it," he has said, “the Whitney Biennial and Documenta need me, but I don't need them."

When PS1 Contemporary Art Center organized “David Hammons: Rousing the Rubble, 1969–1990," the artist wasn't using a phone or a fax machine, according to an essay in the show's catalogue by museum director Alanna Heiss. When they wanted to meet with him, Heiss and curator Tom Finkelpearl had to go to a corner on 125th Street by an Orange Julius stand and call a certain number … and then wait.

Rajaratnam told artnet News during a walkthrough that despite working with the artist on this show, the gallery doesn't even have the artist's phone number, only his manager's.

He's Starting a Gallery.
Perhaps the greatest way for an artist to take back some power is to usurp the role of dealer. Hammons has acquired a venue for that purpose in Yonkers, New York, as the mayor announced in a State of the City address.

He Co-Curated Mnuchin's Show Without Asking.
Remember when we said he “collaborated" with the gallery? Well, a few weeks before the show opened, Rajaratnam told artnet News, Hammons called and invited himself in to check on the gallery's progress in installing the works. He apparently thought the install was too crowded. So he said that ten of the works in the show were coming out. No matter that they were lent by museums and bigwig private collectors and that they'd already been shipped. In exchange, he dropped in those photographs of his own performances, and added the music.

He Apparently Doesn't Like Art.
“I can't stand art actually. I've never, ever liked art, ever," he once told art historian Kellie Jones.

One of His Sculptures Was Seized on by Black Lives Matter Advocates.
His In the Hood, a 1993 sculpture consisting of the top part of a hooded sweatshirt, became the profile picture of choice on social media for many justice-minded art-worlders after the tragic murder of Florida teenager Trayvon Martin, who was wearing a hoodie at the time of his death.

He Loves Him some Duchamp.
Every artist has to deal with the giants who came before him, and Hammons takes an approach to Duchamp that mixes reverence and irreverence. At the Museum of Modern Art in New York, he presented a monograph on the French artist's work as if it were a bible, which art historian Kellie Jones calls “an apparent warning not to worship the western modernist covenant.

"He's described himself as the head of the Duchamp Outpatient Clinic, saying, “We have a vaccine for that smartness virus that's been in the art world for the last fifty years."
And the company that owns that Yonkers gallery? Duchamp Realty, of course.