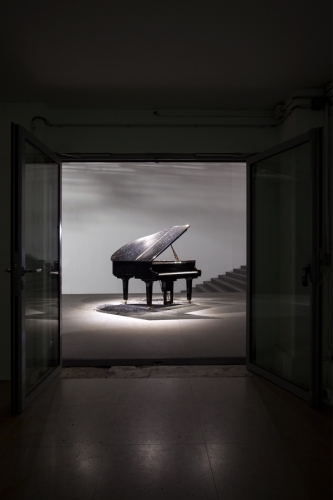 For two decades, David Hammons's angle on survey shows could be précised by one of fellow Chouinard Art Institute alumnus Ed Ruscha's painted axioms: 'I don't want no retrospective' (sic). Also spurned by the Illinois-born, New York-based artist during much of that time: gallery representation, personality-driven publicity and a showy lifestyle, ie the trappings many artists appear to covet. Hammons, who is recent years has nevertheless landed among the top ten living American artists at auction (and the only one of those to put up the work himself, thus profiting from sales, as artists do not), long ago realized that, after a certain point, if you don’t chase, you’ll likely be chased. Of course it helps that his art—which, since the late 1960’s, has scathingly filtered the readymade and assemblage formats through the quiddities of African—American experience—is stellar, and that his refusals are part of it.

In the past decade, however, perhaps because he’s been self-financing his own gallery in Yonkers, New York, possibly mindful of how history will view him (or not notice him sufficiently), Hammons has switched tack. White Cube apparently represents him, and now Mnuchin—with whom he’s collaborated twice before—is mounting Five Decades, Hammons’s first retrospective since the 1990’s. The exhibition will move from early engagements with Arte Povera and Dada (greased body prints, spades, American flags) through endlessly inventive deployments of bottle caps, chicken bones and hair as signifiers of blackness, and on to his recent potent engagement with abstraction, which have ranged from blacking out massive spaces (and giving viewers tiny blue flashlights) to concealing abstract paintings under tarps. Whenever he breaks over, Hammons rarely misses: if at all possible, don’t miss this.