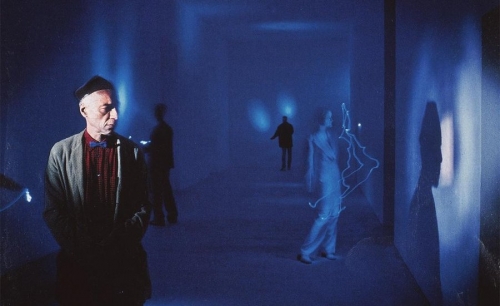 For more than fifty years, the American multidisciplinary artist David Hammons has astounded and enlightened audiences with his diverse, incisive, and conceptually brilliant artworks, many of which have since become icons of contemporary art history and lodestones for younger artists like Hank Willis Thomas and Rashid Johnson who continue to explore race in their work. In honor of his upcoming retrospective “Five Decades” at New York’s Mnuchin Gallery (a rare event for the mysterious and officially gallery-less artist), we’ve excerpted this essay on Hammons's subtle, powerful installation piece Concerto in Black and Blue, written by the curator Bob Nickas and originally published in Phaidon’s Defining Contemporary Art.

Attuned to the poetics of space, from the street to the rarefied galleries that keep its noise at bay, and to the orchestration of everyday objects and materials in his work and the encounters we have with it, David Hammons always sees life as preceding art. “I can’t stand art actually,” he once said. “I’ve never ever liked art, ever.” Among the artists he does admire are those of the Italian Arte Povera generation, who in the 1960s alchemically transformed base materials into art and questioned what might constitute an exhibition. Something could come from nothing, and “nothing,” as a subject for art, could entail everything. Furthermore, a work of art, as Marcel Duchamp reminded us, is always completed by the viewer. Since the 1960s there has been, on the one hand, a continuous production of art in all its familiar forms and, on the other, the set of circumstances we call art—its cerebral and phenomenological incarnations. Seth Siegelaub’s great aphorism, “Art is to change what you expect from it,” still registers for us, as well as for Hammons.

In the autumn of 2002, when Hammons opened his first exhibition in almost a decade, at Ace Gallery in New York, speculation ran high. What would he show? And why Ace, of all the galleries that had pursued him? The vast, windowless, 2,300-square-meter space was closer in feeling to the caverns of the Louvre’s Egyptian wing than to a New York gallery. Hammons’s decision was not so much to compete with Ace’s immensity by filling it up but to conceive a piece especially for it, one that would build on previous gestures—an ultimate statement.
Concerto in Black and Blue was his title: exhibition as composition, to be performed, experienced, with nothing left at the end but a memory. A concerto is an orchestral piece featuring one or more solo instruments, typically in three movements. In retrospect, we can identify the first movement of Concerto in Black and Blue as having taken place in 1993, when Hammons contributed a piece—The House of Blue Lights, in which he substituted blue bulbs for a gallery’s standard white ones—to the “15th Charlie Parker Anniversary Exhibition” at Tribes gallery in New York. Hammons’s 2003 exhibition at the Kunsthalle Bern can be seen to constitute another movement, its skylights covered in blue film to suffuse the almost-empty galleries in blue light.

At Ace in 2002 there would be no works on view, and the only lighting would be provided by small, pressure activated LED flashlights that emitted a point of blue light. Offered the lights at the entrance, visitors plunged into dark, empty rooms. The situation suggested a magical but haunted funhouse, a furtive rendezvous with a person or persons unknown, and a reminder that the sublime is awe-inspiring and terrifying in equal measure. A common reaction at the time was that this had been done before, that Hammons was revisiting the empty gallery of Yves Klein (albeit turning it inside out). Yet it was not Klein’s intention to negate—and neither was it Hammons’s—but rather to enhance what Klein referred to as “pictorial sensitivity.” An empty gallery still has rooms and bodies in space, and an empty gallery in the dark turns darkness into a kind of permeable solid. When the gallery is no longer the realm of the visual, what happens when there is seemingly nothing to be seen? Hammons, having visited Zen gardens in Japan a few years prior to the show, knew that “there are so many kinds of nothingness.”

But it’s an earlier ambition of his that allows us to see Concerto in Black and Blue as a personal work with implications for us all, and to grasp its intertwined poetic and political resonance. Speaking of the Light and Space artist James Turrell seven years earlier, Hammons had mused, “He’s got a completely different vision. Different than mine, but it’s beautiful to see people who have a vision that has nothing to do with presentation in a gallery. I wish I could make art like that, but we’re too oppressed for me to be dabbling out there. [...] I would love to do that because that also could be very black. You know, as a black artist, dealing just with light. They would say, ‘How in the hell could he deal with that, coming from where he did?’ I want to get to that, I’m trying to get to that, but I’m not free enough yet. I still feel I have to get my message out.”