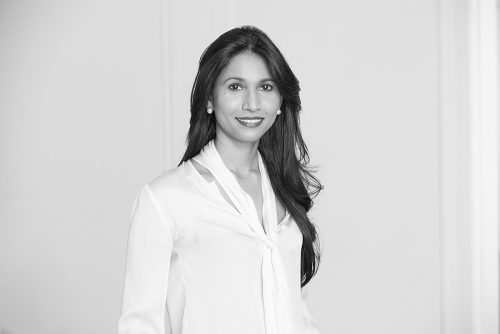 As a partner at Mnuchin Gallery, Sukanya Rajaratnam is a major influencer in the New York City art world. After honing her skills at Deitch Projects and Christie’s, she joined L&M Arts, where she was instrumental in its smooth transition to Mnuchin Gallery two years ago. Seven years later, she has helped make it one of the most important galleries in New York, through her position in highlevel private and institutional sales, and her curatorial work. Born and raised in Sri Lanka, with bachelor’s and master’s degrees from Cambridge, Rajaratnam is an adopted New Yorker. Here she gives us her insight on this art capital of the world.

WHAT IS YOUR PRESENT STATE OF MIND?
Tranquil. I was just in Sri Lanka for a wedding, which happened despite significant obstacles. It made me realize that the universe, if you are at peace with it, has your back.

WHAT ARE YOU UP TO AT THE MOMENT?
Introducing Simon Hantaï to an American audience. His paintings are represented in major museums across Europe, and yet (and because of his selfimposed exile) he remains unknown on this side of the Atlantic.

WHAT IS YOUR MOST MEMORABLE NEW YORK MOMENT?
Getting hired on a whim at a holeinthewall diner on the Upper East Side. I had heard about such bizarre meetings leading to big opportunities, but I had never believed it until then.

WAS THERE A CAREER MILESTONE OR MOMENT THAT CHANGED EVERYTHING FOR YOU?
When the gallery rebranded to Mnuchin Gallery two years ago, it was a sink or swim moment for us. I felt responsible for making it work and poured my life into it. Two years later, and after several successful exhibitions, I had one of the biggest collectors in the world tell me how he had watched the transition and was impressed with how I had navigated it. It felt good.

IF YOUR APARTMENT WERE ON FIRE, WHICH THREE THINGS WOULD YOU RESCUE?
Portraits of my parents at their wedding (which are predigital and hence irreplaceable); my first art purchase (a print by Jackson Pollock); and my son’s blanket (because we cannot get through a night without it).

DO YOU HAVE A RECURRING DREAM?
Perhaps, but nothing that is fit to print.

WHERE IS PARADISE FOR YOU?
Kyoto. It is where I want to go when I die.

WHAT’S THE BEST ADVICE YOU’VE EVER BEEN GIVEN?
Be grateful.

WHAT’S YOUR MOTTO?
Follow your bliss. Excelling is the only possible outcome.

WHAT DO YOU MISS MOST WHEN YOU’RE OUT OF NEW YORK CITY?
The wideopen sense of possibility. No other city in the world has it.

WHO IS THE MOST POWERFUL NEW YORKER YOU KNOW?
This is a tough question as all of our clients are at the top of their game. But I have to say that working alongside Robert Mnuchin, who was a legend in the financial world and now in the art world, is a humbling experience. I have never seen so many doors open at the mention of a name.

WHO IS YOUR FAVORITE DINNER PARTNER?
My son.

PLEASE SHARE SOME OF YOUR SECRET NEW YORK CITY DISCOVERIES.
I cannot call this a discovery given what I do, but Walter de Maria’s Earth Room (which is near where I live in SoHo) is so tucked away that few people have ever been there. It is the epitome of how art can be experienced by all the sense. The smell of theearth (original from its installation in 1977) is so overpowering that you can
actually taste it.

WHAT IS YOUR FAVORITE NYC CLICHÉ? AND YOUR LEAST FAVORITE?
Favorite: That all of us are from somewhere else. It is what makes this city so vibrant. Least favorite: That the city never sleeps.I am in bed by 10 p.m.

WHAT DO YOU WANT TO BE WHEN YOU GROW UP?
Exactly what I am.

Avenue Magazine
Back To Top