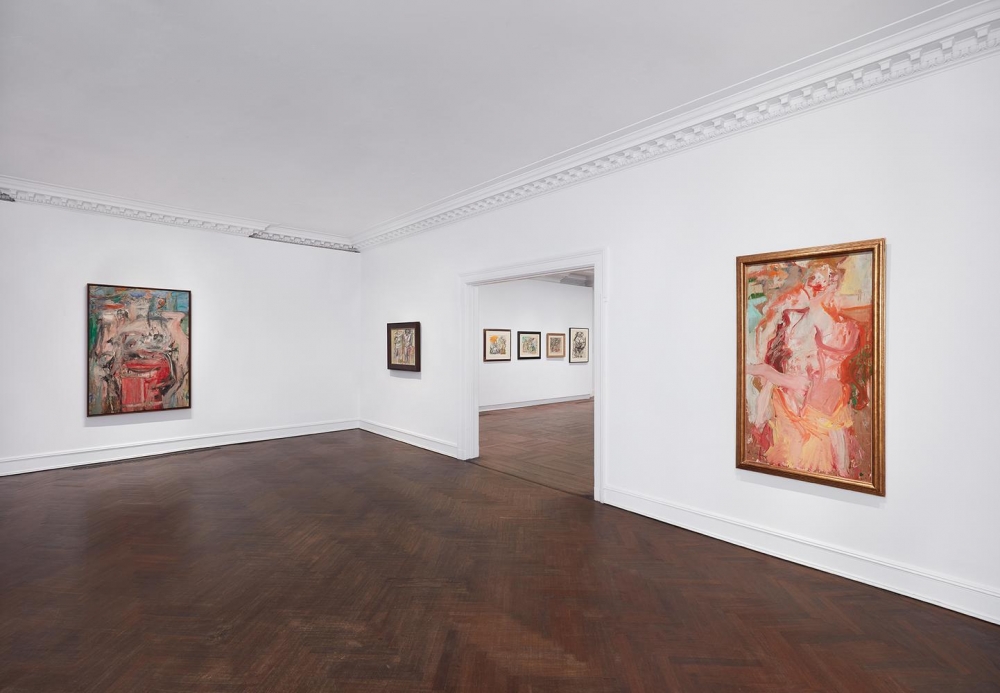 A clash of the titans rages on the Upper East Side. Now at Mnuchin Gallery, “De Kooning: Five Decades” continues the titanomachy of the twentieth-century art gods—and the mortal women who loved them.

In our hypersensitive age, de Kooning’s mid-century “women” paintings can seem like windows onto a prehistoric era, when subjects could become objects and artists were not just allowed, but encouraged, to do anything and anyone. De Kooning was himself a genre-bending modernist, a supremely gifted and classically trained draftsman who became a conjurer in paint as well as a philanderer in the sack. As de Kooning said of Picasso, “He’s the guy to beat.” Indeed. While Picasso drowned his women in the depths of abstraction, de Kooning wiped away the abstract froth to reveal the women hidden just below his surfaces.

I have always been partial to that moment just before de Kooning’s seismic revelation, when his figures were active but still sublimated in mysterious forms, such as in moma’s famous black-and-white Painting of 1948 and the Art Institute of Chicago’s Excavation of 1950. The women that came forward in de Kooning’s compositions for a brief, furious period in the 1950s receded just as quickly as they appeared. In the 1960s they were diving deep into the waves of increasingly aqueous abstractions. By the 1980s they had dissolved into the gentle fog of de Kooning’s diminishing mental acuity.

There are several smaller works on paper here, many of them on loan from the Glenstone Museum in Potomac, Maryland, that locate de Kooning’s “woman” breakthrough between 1948 and 1954. They reveal how de Kooning was working through the tension between figuration and abstraction even before he began to extract the breasts and teeth of his women from his abstract forms.

Among the painters of the New York School, de Kooning was especially sensitive to surface treatment. His wet-on-wet application conveys a sensuously felt form. In paintings such as Woman III(1952–53) and Woman as Landscape (1954–55), the apparent manhandling of his crude female forms, up close, can seem like an embrace of color-rich oils and enamels. Once revealed, it may be impossible to see these abstractions any other way.

The waters off Long Island helped de Kooning cool these heated works. Following his move to East Hampton in 1963, both his palette and his paint handling began to chill. Two Women (1964) and Woman and Child (1967) have loosened their grip on de Kooning’s abstract surfaces. The “Untitled” paintings here from the 1970s feel like a refreshing swim in the hot Hampton sun.

Further bending his creative focus, de Kooning produced during this period a suite of watery clay figures, cast in bronze, most famously his Clamdigger (1972). As sculptures that seem to defy solid form, these are powerful works, crude from afar, like those “women,” but supremely tactile up close, imbued with the artist’s hand in their squished and pinched material. These are wet, sun-drenched visions, at the same time intimately felt and distantly perceived across the tidal flats.

For de Kooning, these figures may signal a long withdrawal into the recesses of cognition. A victim of Alzheimer’s who died at age ninety-two in 1997, de Kooning continued to paint into the 1980s, even as his compositions became more simple. There is long debate as to what exactly de Kooning painted himself during this period, and which compositions were driven by assistants. Nevertheless, forms from decades before remain as vestigial visions. Untitled III (1983) reads like a memory of 1950’s Excavation, with its evocations of lips and eyes, while Untitled XLII (1983) is mere ribbons of red and blue paint over light ground. As de Kooning’s forms dissolve into light, all that remains is the whiff of feeling.

The New Criterion
Back To Top