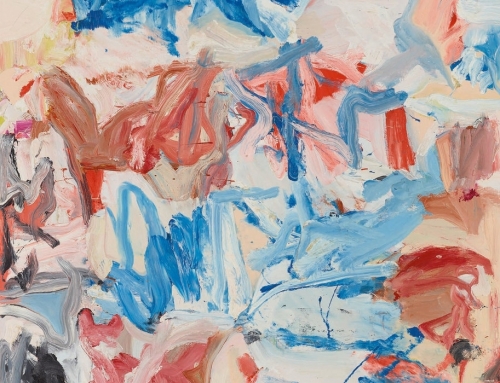 LONDON — The art dealer Robert Mnuchin was testing his theory of parallels between the painter Willem de Kooning and the sculptor John Chamberlain by juxtaposing their work in his booth at Frieze Masters, the major art fair that opened here this week.

“You’ll see the yellow here and the yellow there,” Mr. Mnuchin said, grabbing a few minutes to sit down amid the flurry of visitors at Frieze’s preview on Wednesday. “We’re fascinated by their mutual interest in color and shapes and abstraction.”

Mr. Mnuchin is planning to pair the artists at his Upper East Side gallery in an exhibition opening on Nov. 2 that features de Kooning paintings from the 1970s and ’80s and Chamberlain sculptures from the 1960s and ’70s.

An imploding of typical categories and boundaries seems to be the name of the game in the art world these days. It was certainly in evidence under the billowing tents at both Frieze Masters and at Frieze London (which focuses on contemporary artists), which jointly drew 27,629 people — a figure on par with last year’s previews — to Regent’s Park on Wednesday.

Jeanne Greenberg of Salon 94 gallery, for example, and the Brussels dealer Bernard de Grunne teamed in their shared Frieze Masters booth to present Judy Chicago’s miniature goddess sculptures (Ms. Greenberg) and miniature African figures from the ninth to 17th century (Mr. de Grunne). Ms. Greenberg said she sold the series of Ms. Chicago’s figures for near the asking price of $390,000.

Arnold Lehman, a senior adviser to Phillips auction house since retiring as president of the Brooklyn Museum — home to Ms. Chicago’s influential installation “The Dinner Party” — passed by to say he was pleased to see Ms. Chicago’s black-and-white cartoons for the woven banners in “Dinner Party” in the booth; the museum has them in black and red.

“The concept of the fair works — to expose 6,000 years of art in one room,” said Iwan Wirth, a president of the gallery. “People are price-conscious, but their appetite for great works is unbroken.” Indeed, while the overall climate felt more muted than it was last spring at Art Basel in Switzerland, important works were still changing hands.

Dealers were also encouraged by the results of an auction of the collection of Leslie Waddington, a pioneering Modern-art dealer who died last November, at Christie’s in London on Tuesday night. Every item sold. Francis Picabia’s “Lampe” (1923) — a work on paper in watercolor, India ink and pencil — went for $4.6 million, well over its presale estimate of $1 million to $2 million. It was an auction record for a work on paper by the artist.

The New York dealer Tanya Bonakdar said of Frieze: “It’s better than I thought it was going to be. Every year, you wonder if art fairs have exhausted themselves. That’s definitely not the case. They still keep giving.”

Janelle Reiring, a founder of Metro Pictures, whose gallery hadn’t been represented at the London fair since 2008, said that fair visitors had responded to her mural by Louise Lawler ($175,000), who has a show opening at the Museum of Modern Art in April. She also sold a Cindy Sherman untitled 2016 portrait for $325,000, and works by Robert Longo, Nina Beier and Camille Henrot. Often, “people are interested in younger artists,” she said.

Matthew Marks said that on the first day, he sold pieces by Rebecca Warren, Ellsworth Kelly and Nan Goldin. “It’s not a frenzy, but it’s still active,” he said.

The Goodman Gallery of South Africa reported that William Kentridge’s “Observer” (2016), a charcoal and red pencil on paper, sold for $450,000.

“The blue chip end is easier,” said the dealer Marianne Boesky, who exhibited Frank Stella paintings from 1958, including his first black painting, “Delta,” at Frieze Masters.

“We’ve been so focused on showing what he’s been doing now, and he is so contemporary,” she said of Mr. Stella. “We wanted to remind people where he came from.”